If you want to take a break from collecting WoW Classic items and raiding dungeons, then you may want to consider challenging yourself by playing as a Hunter in PvP. Before you do so, there are a few things to get your head around first, which we will be detailed in the following article.

The first thing to remember here is that you should focus on gathering as much stamina and agility as you progress, as this can help you a great deal. You can also make up for the fact that you are not a melee character by having a decent two-handed weapon and good gear.

Techniques such as Scatter Shot will need to be implemented since Hunters are unable to attack targets in the range of five to eight meters away. This method will also come in very handy when you go up against casters since it will help you prevent them from casting. Meanwhile, don’t focus on Damage over Time methods if they don’t kill your enemy or if they don’t last the entire duration.

What Race to Pick

The choice that you make here isn’t as reliant as it would be in the PvE so you can focus on whatever your preference is. If you are a horde player, then the most popular choice tends to be the Orc, due to its DPS burst with Blood Fury, and how effective Hardiness is when in PvP situations. They can also rely on their pets to do 5% additional damage.

If you are an alliance player, then the Night Elf can be very effective. They offer the highest base agility in the entire game, which is very useful for DPS. The doge bonus that comes with the race can get you out of some sticky situations too, so they’re definitely worth considering as your race of choice.

Pets play a massive role when it comes to Hunters in WoW Classic. They don’t offer the same cutesy effect that cosmetic pets have, but rather offer their own specific abilities to aid you in combat depending on their species. 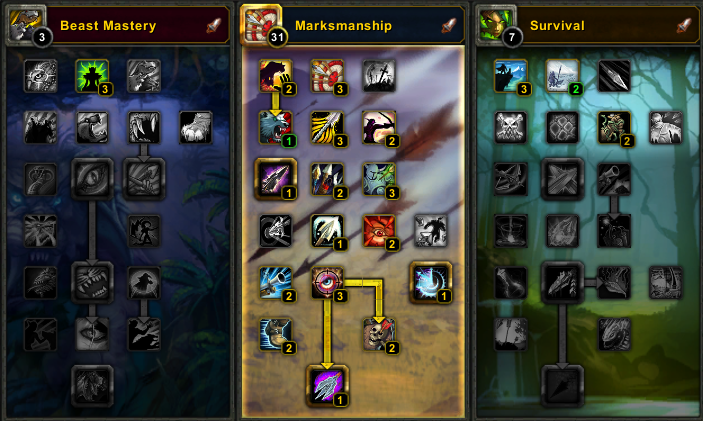 For example, the Sanglier’s Charge is very effective since it can dish out added damage and prevent your enemy from moving, so hunting down your prey can be made much easier. Meanwhile, the Felin offers a more-stealthy approach with Dash and Prowl. Eyes of the Beast can also be very useful to scope out where your enemy’s base is before you prepare your advance.

Whichever pet you decide to go with, you should try and focus them on enemies that are casters. So when coming up against mages, priests, and warlocks, this is where your pets will come into play effectively. They boast high attack speeds so when playing against these classes they are far more useful.

Yes, as mentioned before you can get away with melee with the Hunter if you have a good two-handed weapon and decent gear. That being said, it is of utmost importance to note that they are not first and foremost a melee class. Their area of expertise lies within being a ranged DPS class. If you are confident enough to take the melee way forward, then by all means do so, but you should try to play to the strengths of the class where possible.

Of course, Hunters are also renowned as being the resident Gankers of WoW Classic. If you apply abilities such as Aspect of the Pack, Aimed Shot, Freezing Trap, and Track Humanoids, you will be only held back by your imagination. Just a quick point on Ganking for those who are unfamiliar with it; the term comes from a player or group killing another in overwhelming and what some might consider being unfair fashion. Still, the abilities are there for a reason, so have fun with it and be as sadistic as you like.

So, if you are looking for a brand-new challenge in WoW then training up a Hunter for PvP is certainly a way to go about it. Sure, it might be a side track from collecting WoW Classic gold or usual PvE activities. But if you do fancy a forage in the Player vs. Player segment of the widely popular MMORPG, then there are certainly worse ways to go than challenging yourself to play against your fellow players as a Hunter. Just remember the tips we have given you and you’ll soon be a force to be reckoned with.

Have you tried out this WoW Classic class in PvP? Let us know in the comments below!

How Do I Motivate My Remote Team?

What's the Difference Between a Pyramid Scheme and Multi-level Marketing?