Home > Software > What Is Devops? Its Evolution & Future
Software

DevOps has become a very popular buzzword in the software industry today. Almost every software professional, no matter the domain they work in, have heard of DevOps. Moreover, more and more companies and organizations are switching to DevOps methodology because of the large number of advantages it comes with.

DevOps is an enterprise software development phrase that defines a type of agile relationship between development and IT operations. The goal of DevOps is to increase the overall efficiency of the system by advocating better communication and collaboration between these two business units.

Now that we all know what DevOps is, and how it can be beneficial to use this approach in our projects let’s look at some of the lesser known facts about this technological approach. Not many of us are aware of the evolution of this interesting development and how this methodology is going to affect the future of the IT industry. Keeping this in mind, let us understand the evolution and future of this technological approach to perceive why you should learn DevOps this year.

Development, testing, deployment, operations and maintenance are common keywords for a software professional and have been this way for a long time. But the way each professional understands and executes each of these stages is very different depending upon the job role they are playing.

In the last couple of decades, there have been several approaches that have defined how a software company should work to drive the final product. Approaches like the Waterfall Model, the Iterative Mode land the Big Bang Model were vastly used depending upon the project size and other factors.Each of these models has its own pros and cons, making them ideal in some scenarios than others.

But, software engineers needed something more– an approach that could be applied to any process, no matter the size of the project or the company for that matter.

At the 2008 Agile Toronto conference, Patrick Debois, a consultant, speaker and conference organizer and Andrew Shafer (now co-founder of the Puppet Labs),initiated a movement that changed the software industry for the better. The duo gave a talk on a concept they had named “Agile Infrastructure.” Unifying the Development (Dev) and the Operations (Ops) ends of the SDLC, Debois and Shafer proposed a model where there would be continuous integration rather than a linear or partially iterative process.

This model was initially considered to be a new subset of the Agile model itself. Debois himself christened it “Infra-Agile” or “Agile Infrastructure.”The biggest difference between the model proposed by Debois and the Agile model is that Agile does not constitute continuous deployment and delivery.

The Infra-Agile system was used in several different projects for the next couple of years. The most notable of which is Flikr’s 10+ deploys per day with the help of Dev and Ops cooperation. This was an achievement unheard of because most organizations at that time used traditional SDLC approaches which could get nowhere near the 10+ deploys that Flikr managed to achieve.

Following the success of the Infra-Agile model in the IT industry, Debois wanted to spread awareness about this technological methodology extensively. To achieve this, he and his team of experts announced the first DevOps Days way back in 2009. Since then, DevOps Days have been organized globally on a regular basis. The events consist of several talks, conferences and seminars on software development and IT infrastructure operations along with the intersection between the two. 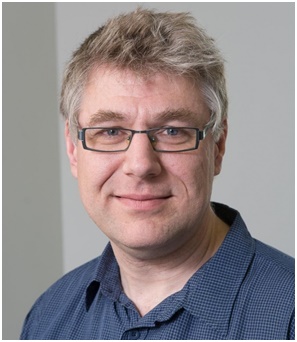 These events have been a key factor in the promotion of the term “DevOps” globally.

The main goal of DevOps is to reduce the time between making a change to a system and the modification being placed into the normal production cycle while ensuring high quality.

Now that we understand the origin of DevOps and the reason it exists, let’s look at where this technological approach is headed, how it will affect the future of the IT industry and why you should learn DevOps this year.

Since the early years, there has always been a very high adoption rate for DevOps as a methodology in the IT sector. A survey by the SaaS cloud-computing company, RightScale, published in January 2016, shows that DevOps adoption increased from 66 percent in 2015 to 74 percent in 2016. And, when it comes to larger enterprise organizations, DevOps adoption is even higher, depicted to be at a whopping 81 percent. 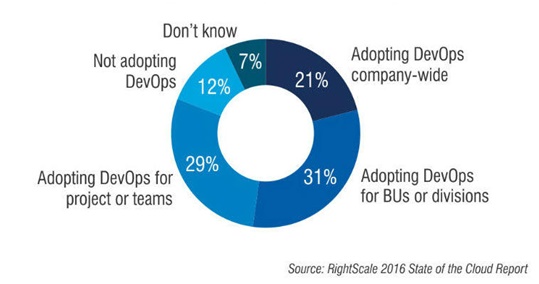 Enterprise Adoption of DevOps in 2016

With that, we can conclude that the adoption of this approach is going to go up with time. According to several independent reports, majority of the companies around the globe will shift their IT software product operations to an Infra-Agile/DevOps model by the end of 2021.

DevSecOps – DevOps and Security at their Finest

Due to its continuously integrated nature, DevOps was initially considered “not-so-safe” to work with. Several professionals were hesitant to adopt DevOps in their workflows because of this concern. But, as different variations of the methodology started getting innovated, a new branch called DevSecOps sought its home in several organizations.

As we have already discussed, DevOps aims to improve communication and continuous delivery by merging different departments. DevSecOps adds security to this mix. This approach removes the security department from the end of the development cycle and makes it a continuous and iterative phase.This allows businesses to assess the architecture and containments of their product at an early stage which prevents any unplanned discrepancies.

DevSecOps is gaining popularity by the day and according to analysts, it will probably be adopted by most businesses working with DevOps by the end of 2019.

When it comes to deployment, each organization has its own personal preference for platforming and cloud– on premise or otherwise. There has been a lot of debate over which cloud platform is the most cost-effective, secure and scalable when it comes to moving critical infrastructure.

With the rapid adoption of DevOps and so many applications coming out every day, it is only a matter of time until this approach is used to provide deployment systems into different platforms and allow for multi-cloud support, according to disruptive tech firms like Right Scale. You can even see the essence of this thought in the company’s products. Right Scale provides a Multi-Cloud Platform which lets you mix and match public clouds, private clouds and virtualized environments to meet your cloud portfolio strategy.

Those who are paying close attention to the IT trends will know that majority of cloud users are now demanding choice, which is obviously going to drive massive growth in multi-cloud, multi-platform adoption this year. This will lead enterprises to unifying the cloud-native analytics platform whether the system is deployed in Amazon, Microsoft or Google.

With the advent of smart devices and IoT, good software has become an integral part of any kind of hardware. In the coming months, more and more smart devices are going to be launched and it will become essential for hardware manufacturers to incorporate DevOps into their business model. This will make it necessary for their personnel to work on hardware and software continuously.

Several organizations have already started using a mix of DevOps and IoT in their projects. For instance, Elon Musk’s Tesla has taken software development and deployment for its cars to a whole new level, even delivering updates wirelessly to its vehicles over the air. Evidently, this approach allows constant product updates which can include safety updates and fixes to issues that would have resulted in a recall in the past.

DevOps is a revolution in the IT industry that has become a catalyst to several different innovations. Looking at the career opportunities in this technology, the above discussed reasons point towards a bright future for DevOps. If you are planning on getting into an interesting career, this should be the necessary motivation for you to learn DevOps this year.

DevOps is here to stay and is remodeling the software development and delivery approach, so gear up and get into this technology before it’s too late.

Is Geneca Software Development One Of The Best Out There?