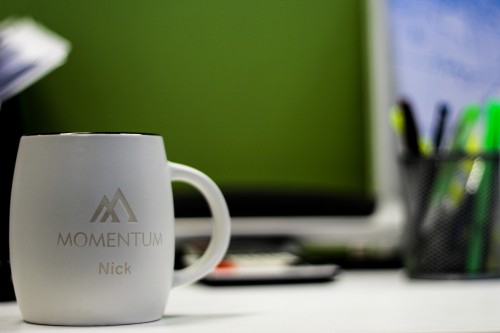 While some view a website as disposable or insignificant, it is a ultimately a unique resume for your company online, applying for eye-time amongst potential partners, applicants, and visitors. You only get one chance at a first impression in the online world, so building the perfect website to fit your business is extremely critical. Momentum Ventures needed a new website so that they could improve their first impression amongst potential business leaders and entrepreneurs. Based in Montreal, Quebec, Momentum Ventures decided to go outside their office to complete this task, employing a local design firm to work with guidance from Momentum Ventures’ experienced internal design team. Now in the very final stages of launching their new site, Momentum Ventures CEO Matt Keezer believes the process can be broken down into three key principals.

Firstly, Keezer says you need to have an established vision, saying “our original site was somewhat convoluted, putting the spotlight on a massive value system that, from the outside, could be viewed as complicated” adding, “We needed to really streamline the language surrounding what our company was about so that people came away with a clear idea.” In addition to changing the language, Momentum Ventures had decided to broaden the message regarding its past successes. “We decided we had nothing to hide,” says Keezer, “So why not show off our past businesses?”

As we previously noted, Momentum Ventures had decided to work outside of its team to build their new website. Keezer says this had nothing to do with the quality of his team, but instead about getting new perspective saying “this is a project that would have benefitted from fresh eyes,” adding, “We have a top notch design team here that contributed heavily to the launch, but between current work and work on the horizon we didn’t want want to entirely disrupt their train of thought.” Ultimately it was a matter of networking as well. With Montreal being at the forefront of Canada’s tech movement their were no shortage of highly recommended designers available according to Keezer. At the end of the day, you will need to vet, compare, and challenge designers to earn your project.

Completing the website wasn’t simply about hiring a team. It took a lot of legwork from the Momentum Ventures team. “You need to be absolutely ready with copy and design inspiration before you hand off your project to a design team,” says Keezer, adding “by not having your own house in order you introduce many obstacles between you and your new website being completed.” Keeper says preparation is everything, and being unprepared can derail your entire project before it even truly starts.

Following these tips has resulted in Momentum Ventures’ new website project to run smoothly and efficiently. While every project can have its hiccups, being prepared and thorough puts you in the best position to succeed on any front, including website development and implementation.

How to Rock an Awesome Office Interior

10 Excellent Tools You Must Apply In Web Performance Testing

Pros And Cons Of Freelancing As A Web Developer

8 Useful Tips for Collaborating with a Software Development Company