Home > Gaming > Is VR A Game Changer For The Casino Gaming Industry?
Gaming

Is VR A Game Changer For The Casino Gaming Industry?

Having endured a long gestation period and a slow start in the marketplace once it was properly ready to launch, virtual reality is gradually becoming the norm within the tech and gaming worlds – expanding the possibilities when it comes to both leisure and business as it does so. A lot of business sectors will be seeking to capitalise on these possibilities in the upcoming years and this piece will examine how the emergence of virtual reality could change the online casino industry.

It was recently suggested that VR gambling options could be bringing in revenues of 50 billion dollars by 2021, which caused a stir, although it has since been pointed out that this was the total gaming revenue for the gambling industry – not just online casinos. However, the study from Juniper Research did indicate that online casino was the area that VR gambling would concentrate on – and there is a strong belief that these games could be among the first to successfully monetise VR headsets like the Oculus Rift. This is because the ability to recreate the glamour and excitement of the big Las Vegas casinos that it offers would take online casino to another level in terms of customer engagement. Of course, should they actually seek to recreate real casinos in Las Vegas then a battle could ensue between the different big online casino companies for the rights to simulate the MGM Grand or the Bellagio in their games – which would certainly be appealing to those who dream of visiting these casinos but don’t have the time or money to do so.

Although VR online casino has not really arrived in a big way yet, the existence of one game – namely SlotsMillion VR Casino – represents the first attempt and gives us some idea of what it could be like. This game immerses you in a futuristic 3D virtual casino and allows you to play for real money  – which is a step forward from online casino console games. It presents us with a world in which we can actually physically spin a slot machine game, providing a greater degree of interactivity than even conventional online casino – and suggesting potential for things such as interactive bonuses. 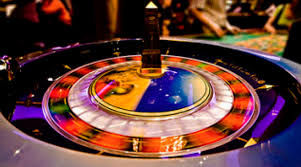 This could well attract a younger gaming generation who tend to focus on matters such as the quality of graphics and immersion and gaming skills – online casinos such as 888casino have already being doing this very well with live casino features allowing their customers to interact with real dealers on a live stream – rather than the kick of gambling for money. Furthermore it is not just slots games that could be rendered more appealing, as VR casino poker could also find a much bigger following. This is because poker is a game that is naturally interactive, so anything that increases that makes it a better gaming experience. Virtual reality games like SlotsMillion VR Casino provide the opportunity for players to experience live casino-style environments, while having friends support them from the sidelines.

Although VR online casino gaming is still in its infancy, the greater illusion of reality that it can create could see this activity reach younger gamers while retaining those who already love it.

A Helpful Guide To NAS Systems