Home > Gadgets > Is It Time To Upgrade Your Mac? A Few Signs To Watch For
Gadgets

Is It Time To Upgrade Your Mac? A Few Signs To Watch For 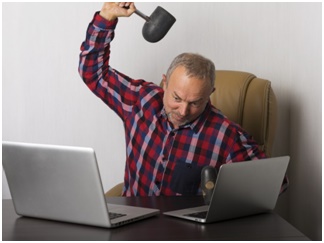 One of the primary selling points of Apple computers is their longevity. Many users report using their Macs for nearly a decade before the machines run out of useful life. But nothing lasts forever, and like every other technological device, Mac computers do eventually need to be replaced. If you aren’t someone who replaces their existing tech with the latest and greatest upgrades every year, how do you know when it’s time? Thankfully, there are a few telltale signs.

1. You Can’t Install the Latest Version of the Operating System

We all have that friend who’s still carrying around an iPhone 4, claiming that it works just fine — even though they are still operating on iOS 7 and can’t use half of their apps or download the new emojis. Mac computers are similar. Sure, they will still work without the latest version of OSX, but they won’t work as well as they should. The older your machine, the more likely it is that the next OSX upgrade will be incompatible, and you’ll eventually lose functionality. This may not be a concern to you in the short term, but like your friend who doesn’t have the taco emoji, it’s eventually going to become an issue.

2. Your Computer Takes Forever to Do Anything

In rare cases, a significant slowdown (as in it takes 20 minutes for the computer to just boot up when you turn it on) could be caused by malware or viruses, and that could be solved by installing antivirus for Mac on your computer. But more likely, significant slowdowns mean that your apps and all of the upgrades you done over the years are putting too much strain on the software, hard drive, or RAM — or all three. In short, when your computer runs slow, and no amount of tinkering helps, it’s probably time for a new one.

3. Your Battery Won’t Hold a Charge

Poor battery performance is one of the telltale signs that your Mac laptop is dying a slow and painful death. If you have to keep your computer plugged in all the time to maintain battery life, it’s probably more cost-effective in the long run to replace the entire machine. Batteries for Mac laptops are generally expensive, and you may not even be able to get one, since models made within the last few years come with the battery built onto the logic board.

4. You’re Running Out of Space and Memory

Experts suggest using no more than 90 percent of your disk space, or having at least 10 GB of space free. Exceeding those levels will lead to slowdowns and other issues. In addition, it’s best to have at least 4 GB of RAM to ensure at least a decent performance. While you may be able to correct some of these issues by deleting some of your files (particularly emails, which can take up a lot of space) and upgrading the RAM, there will eventually come a point where all of the deleting and upgrading in the world won’t make a difference. When that happens, you need a new machine.

5. You Spend More Time Frustrated With Your Computer Than Working on It

You’ve always loved your Mac because it’s so easy to use. Except that it hasn’t been that easy lately. You’re constantly erasing this, checking that, and cursing at it because it’s slow or not able to do what you need it to do. When that happens, and you would rather try to do all of your work on your iPhone – or anything – than use your computer, it’s time for an upgrade.

Some people hesitate to upgrade their Macs because they are afraid they will miss out on the next great thing. The fact is, Apple is constantly innovating, and no matter when you buy your Mac, there will be a newer model on the market within a year or two. Don’t let fear of missing out keep you from upgrading the computer that you need now. Rarely are the changes from one model to the next so significant that you will lose functionality or not have access to a specific feature. So don’t frustrate yourself and put your files in danger by running your Mac into the ground, but upgrade when you have the chance and remain happy with your machine.

5 Gadgets Your Friends Will Envy

Smart Devices in the Retirement Home