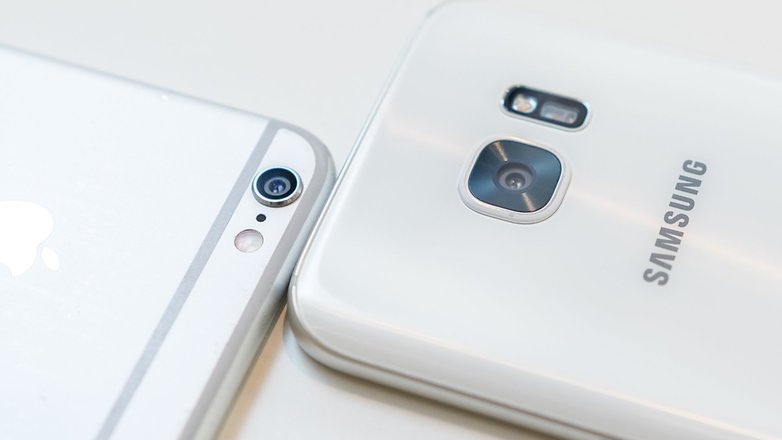 So, here are the quick details about the camera specifications of Galaxy S7 and the Apple iPhone 6S.

The Galaxy S7 comes with a 12 MegaPixel Rear camera. The camera has features like Phase Detection Auto Focus Mode, f/1.7 aperture, and Optical Image Stabilization. The Front camera is of 5 Megapixels in the Samsung Galaxy S7.

The Apple iPhone 6S comes with a 12 Megapixel rear camera. Both smartphones share the camera with same megapixels. The Apple has added some more features to the camera, like Phase detection Autofocus, Optical Image Stabilization, and f/2.2 aperture. The Front camera is also same as Galaxy S7, i.e., 5 Megapixels.

Both the smartphones share the same Megapixels of the camera.  However, it is not necessary that they’ll share the same sensor features. All the magic of the camera depends on the sensor of the camera. In the camera quality test done by Youtuber, SuperSaf shows that the camera performance of both smartphones. In the video uploaded by SuperSaf, the tests show that even with the smaller aperture than iPhone 6S camera, the Galaxy S7 has great camera sensor. Its camera sensor captures more light on almost every pixel, Resulting in the better picture quality than iPhone 6S.

The Apple iPhone 6S has an excellent camera regarding Optical Image Stabilization during video recording, but the Galaxy S7 camera overpowers it due to better use of every pixel in the sensor. Also, the Front camera of Galaxy S7 captures crisp and colorful selfies. Even with low light conditions, it captures vibrant pictures.

There is not doubt that iPhone 6S has a beautiful camera. However, the test shows that the camera of Galaxy S7 is better than iPhone’s Camera. Now, there is speculation in the smartphone market that Apple may introduce more powerful camera in new iPhone series smartphones to compete with Samsung Galaxy S7.

The Need For Bitdefender?

Time of Flight 101: Here Is What You Need To Know

Mobile Phone – How it All Started?

Why Resellers Need to Keep an Eye on Smartphone Innovations