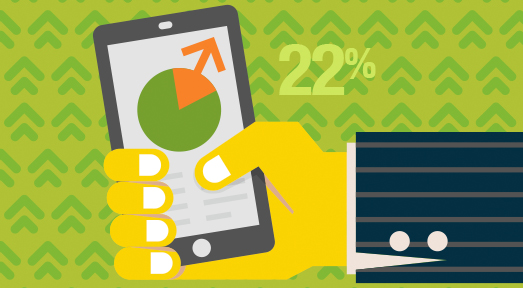 If Black Friday is the pinnacle of American consumerism, then Cyber Monday is a vision of its future. This year, according to Adobe data, the online shopping blitz that caps the Thanksgiving holiday weekend brought in $2.65 billion in one day, an almost 15% increase from 2013.

A few years ago, that might have been difficult to imagine. But e-commerce is rapidly taking its place at the forefront of the modern, globalized economy. Even on Black Friday, one out of every four transactions were made using a smartphone or tablet computer, according to an IBM report. Despite the fact that Black Friday continues to be the most popular day of the holiday weekend, an AOL survey found that Cyber Monday shoppers spend, on average, $160 more than shoppers that go to brick and mortar stores.

It is no wonder then, that e-commerce giants shoot to the top of retailer charts on Thanksgiving weekend, in Amazon’s case, with over 64 sales per second. Traditional retailers with prominent Internet shopping frameworks see similar gains. Walmart announced that Cyber Monday was the biggest online day in its history for orders.

These and other big-name vendors are the face of an industry now worth $40 billion in the US alone–a figure expected to rise to $50 billion in 2015–but in recent years especially, it’s the startup entrepreneur sector that has produced some of the most cutting-edge advances. Mobile app thundR, for example, employs a personalized shopping algorithm that brings together contextual, location-based information and combines it with a user’s age, interest, and social media interaction to offer the most exciting and unique deals on the market. Another mobile app, Saveful, uses advanced software to scan major online retailers, vetting factors like rebates, sales, and low shipping costs to provide customers the three lowest prices on over 4 million products.

As mobile in general continues its global conquest, the opportunities for these sorts of market innovations will grow along with it, and startups with a keen eye to the e-commerce landscape will find a place for themselves in the economy of the future.

In the United States, over 133 million shoppers left the long lines and congestion of conventional shopping behind this year and opted to do their post-Thanksgiving shopping from the comfort of their homes and mobile devices.

But Cyber Monday, and the e-commerce revolution it celebrates, has also made inroads all around the globe. For a while, North America and Europe were considered the only regions with the retail infrastructure and capacity to support heavy Internet sales, but that is rapidly changing. A recent Nielson study found that regions like Latin America are begging for more e-commerce, while Asia is set to overcome North America in Internet sales.

The study shows that in emerging markets like Latin America, browsing rates are double the buying rates across many categories. In Asia on the other hand, it is the opposite—buying rates often far exceed browsing rates. In either case, there are promising behaviors for intelligent e-commerce providers to leverage.

In Colombia, one such startup, ofi.com.co, which offered up to 40% off products from their 20,000- item inventory for Cyber Monday, is quickly establishing itself as the leader in a growing B2B e-commerce market. “The market opportunities that both Colombia and the rest of Latin America outside of Brazil provide for online-based ventures shouldn‘t be ignored,” says OFI Founder and CEO Peter Ostroske. “I believe the growth that OFI.com.co has experienced in just six months of operations is a testimony to Colombia’s market, which has recently overtaken Peru to be the region’s fastest growing economy,” he adds.

Ostroske found a niche to fill in one of the world’s biggest emerging e-commerce markets and worked within the limitations of the Colombian business environment to provide a profitable service to businesses and let demand drive growth. “We launched the business with the intention of winning the SMB (small-to-medium) segment, however, after only six months it‘s clear the need extends to corporate customers as we begin servicing some of Colombia’s largest companies as well as the Colombian government,” he says.

Another start-up company has also taken advantage of the global opportunities of e-commerce is Wooassist. The Philippines-based startup provides Internet store support service to users of the e-commerce toolkit for WordPress, Woocommerce.

“E-commerce has allowed Wooassist to play the advantages of being internationally based while providing a service to Western clients of unparalleled e-commerce support. Our business gives back to Internet markets that have made our business possible,” stated Wooassist Founder and CEO Nicholas Jones.

The growing pool of men and women familiar with e-commerce have the potential to become the next generation of entrepreneurs and take e-commerce to a level never before seen.

Members from Alibaba, the largest e-commerce platform in the world, are already establishing new ventures and bringing new ideas to the table.

Former Alibaba employee Zulin Gu, who founded an email mobile app called Wave said, “Alibaba is the pinnacle of e-commerce in this day and age. Being part of that, I learned so much, which I was able to scale down and apply in starting Wave. Most of all, it was just witnessing the trends of e-commerce evolve and simply take advantage of them.”

Preferred products to buy online are, not surprisingly, electronics, apparel, and travel packages. These, not surprisingly, are non-consumable—durables and entertainment-related–products. However, as barriers like shipping time and security are eroded, startups especially should be looking to capitalize on new opportunities.

eSalon, for example, has found a way to breakthrough in the cosmetics industry, which, because of the hands-on nature of the shopping–looking at different makeups side-by-side, smelling perfume testing strips–has been resistant to e-commerce transition. By offering greater color personalization choices, low prices, and expert phone and online support from professional stylists, eSalon managed not simply to bring hair-coloring shopping to the Internet, but actually outcompete traditional salons.

The possibilities of e-commerce are endless, and Cyber Monday is testament to the incredible about of money, products and services that can move and exchange hands through the web.

Keeping Track of Your Workers' Payroll with Effective Equipment

5 Essentials For Any Retail Store

How To Make Seasonal Shoppers Stay With Your Magento Store Lifelong