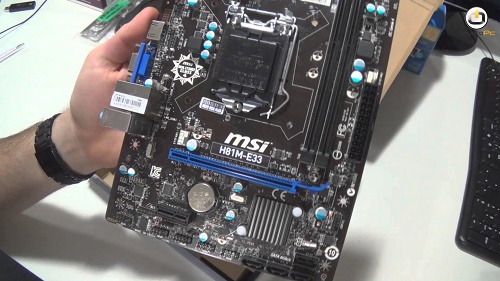 Thankfully, we’ve taken the hard work and research of finding the right budget motherboard and done it for you. After scouring the reviews and looking for the best reviewed board for the best price, we’ve concluded that the MSI LGA 1150 H81M-P33 is the best bang for your buck. 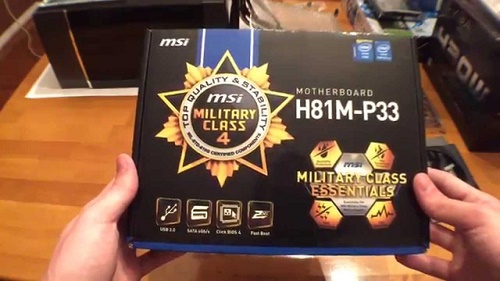 For less than $60, you’ll have a high quality mobo for gaming that can handle all the latest components at an attractive price. Plus, thanks to a February 2016 update, you can overclock the MSI LGA 1150 H81M-P33 and run Windows 10. Basically, you’re getting a premium motherboard that other models charge triple the cost. It’s a no-brainer with this motherboard.

Let’s talk specs: the MSI LGA 1150 H81M-P33 chipset is Intel H81?Express. You’re going to be able to install any 4th Generation Intel Core CPU you purchase. Plus, with the patch for overclocking, you’ll be able to run your system to its fullest. The OC Genie 4 lets you overclock in less than a second. The motherboard supports DDR3-1600/1333/1066 DIMM Slots, with a max capacity of 16 GB of RAM. For storage, you get two SATA3 ports, and two SATA2 ports.  There’s two PCI expansion slots, so you can connect video and sound cards directly to your motherboard. As for connectivity, two slots of USB 3.0  and eight slots of USB 2.0 so you can integrate all the top-of-the-line components required for a gaming PC.

The MSI Intel H81 LGA 1150 H81M-P33 makes it easy to check your specs and set them to the desired levels. With the Command Center you can easily access the needed information and set it how you like. The motherboard has a Fast Boot option to quickly enter boot and enter your operating system in just a few seconds. Plus, you can simply update and backup your BIOS firmware when your computer is in standby during the night. The interface on this motherboard is easy to navigate and it sets it above others in its price-class. Because it’s so easy to calibrate, you won’t have to fear upgrading components down the line. If you want to install some more RAM, you can do that with ease thanks to the simple interface and sturdy construction.

Reviewers commend the MSI Intel H81 LGA 1150 H81M-P33 for its reliability and sturdiness. It’s small size makes it fit in a variety of towers and It’s easy to install, as user commend it’s power supply location. This makes putting it into your machine a real breeze. Users say that the motherboard works great over a long period of time, some having bought upon its 2013 release. Even though this motherboard is over three years old, it’s quality manufacturing has made it last in high-quality gaming rigs for years. Even small details, like the motherboard’s packaging, are often mentioned in reviews because of how secure and safe the chip is on arrival.

If you’re gaming on a budget, you want a motherboard that performs well, keeps costs down, and allows you to install components that will make your gaming experience at its best. The MSI Intel H81 LGA 1150 H81M-P33 is the motherboard to pick. It supports up-to-date Intel components; it includes multiple slots for all your necessary components, plus upgrades later; it works fast and allows for overclocking; finally, it has an interface that’s easy to navigate and install. It’s a quality component that many gamers have installed in their systems for years. The motherboard is what allows your computer’s parts to work together, so make sure to get the best motherboard for gaming like the MSI Intel H81 LGA 1150 H81M-P33.

Is Netflix Likely to Add Casino Offerings to its Games Section?

Are Online Casinos Safe? Can Your Money Get Stolen?