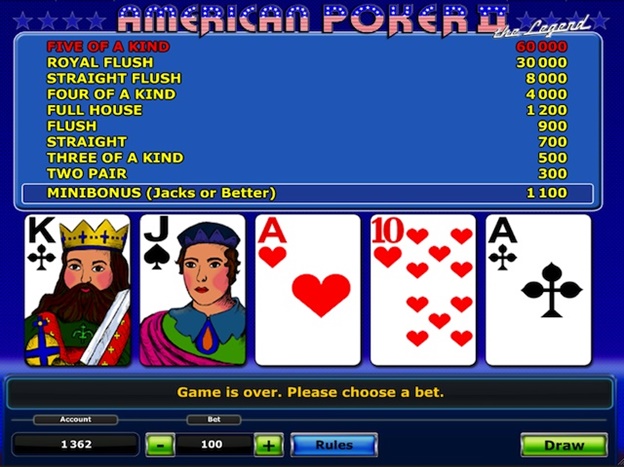 Even though poker has been around for centuries now in different forms and variations, companies from all around the world are still trying to come up with something unique and revolutionary.

At https://vulkanvegas.com/en/category/video-poker alone you can see 20 different poker games such as :

What are they trying to change? Dealing system, values, RTP and a design are main and probably the only targets. Seems like the industry is never going to run out of ideas as each year dozens of new poker games appear on the market.

If you are wondering if you should give new games a try the answer is definitely yes because firms put in excessive amounts of effort trying to satisfy customer needs, looking for ways of attracting new users and all of those benefits should be used.

The definition of Pick ’em poker is that it is same as video poker, but simplified. This time we have one from Realtime Gaming and they have really stepped it up. What’s so impressive about this RTG edition is that it has a 0.05% house edge, meaning that the theoretical return to player (RTP) is at 99.95%!

One important thing to note is that RTG poker pay tables might differ depending which casino you are playing at.

The round starts with two cards dealt directly to the player after which two more stacks are offered with an option to keep one. 2 additional cards are dealt afterwards and the five cards you have pay out.

Whether you are a fan of pick ’em or not, the 99.95% RTP is the type of benefit we were talking about earlier, and should definitely be used. 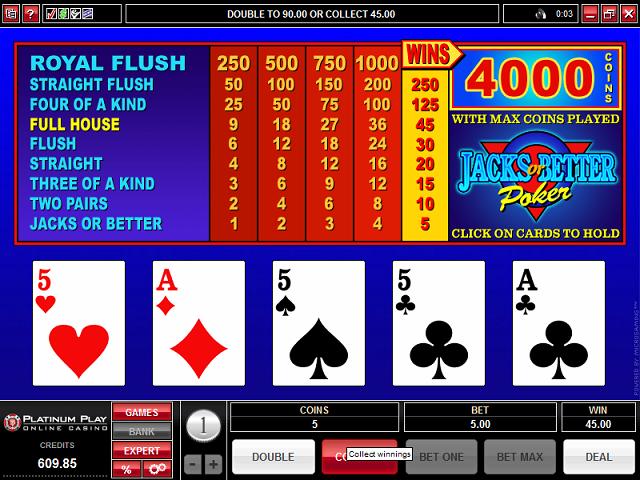 This video poker comes from the guys from NetEnt. It is nice to see that they increased the payout for the straight (from 4/1 up to 5/1). The total RTP is at 99.56% which is 0.02% higher than the average for this variation.

Jacks or Better is a great way for beginners to see how the game of poker functions fundamentally and is often recommended by more experienced players as one of the first modes every newbie should play.

RTG is doing the hard work this whole year, putting out great poker machines, along with their other innovative casino products. Both Double Jackpot and Aces and Eights are RTG games with RTP’s at 99.63% and 99.78% respectively.

The gameplay for both is considered slightly more complex compared to Jacks or Better but it’s not that hard to learn. Both have higher RTP percentages than previous editions of that video poker mode, but are not that great as Pick ’em and should be learned before trying, as there is no point of jumping straight into it for a 0.02% or 0.05% difference without proper knowledge and preparation.

Once again from RTG, we have an All American edition with RTP percentage only 0.04% lower compared to the double jackpot. If you are at least a little bit better at All American rather than Double Jackpot, then it doesn’t really make any difference as executing it the right way is much more useful than theory.

Knowing that a lot of All American video pokers have payback percentage under 99% choosing this one is a no brainer. Those under 99% games are older, and were not changed in the past and investing money there is just not worth it nor it is a good idea because of no benefits of giving away over 1%.

Classic Bonus has 99.17% RTP while the Double version is just a little bit, but significantly higher, at 99.37%. One thing to be careful with these two are pay table structures, as some versions drop under 99% at some point.

These two are at the bottom of the list for two reasons:

Compared to Jacks or Better, where even amateurs can learn how to play quickly, why would anyone play bonus types? Simply because people like the playstyle it requires, tactics need to be adjusted not only between hands but also drastically during the hands and right after one card has been dealt, with short periods of time to think about it.

The Realtime Gaming company is nailing it in 2017 without a doubt, as it just doesn’t get better than 99.95% RTP, no matter which Poker variant we are talking about. The only real competition out there for this year is Jacks or Better by NetEnt which offers great percentage to players along with simple and entertaining gameplay.

Improve Productivity Through Business And IT Unification

How To Use Social Media To Find More Consulting Clients

How to Choose a Game to Your Liking at Rabona casino: Exploring the Assortment

Why Online Slots Are Popular and Fun

Great Gaming Experiences To Try In 2021