Best In The Business: Nexus 6P vs iPhone 6S 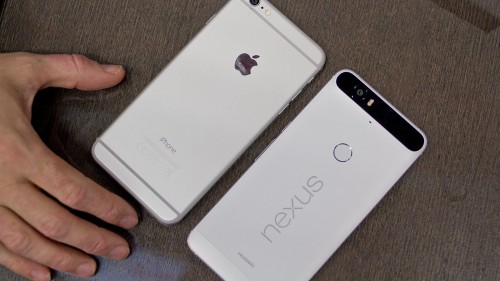 Apple recently upgraded their iPhone 6 Plus, and launched the ‘S’ version of the device, which brings in a couple of improvements over the previous version of the device. And Google too rolled out the new Android 6.0 Marshmallow along with the new Nexus Lineup. The most significant device that comes up head to head with the new iPhone is the Nexus 6P. So let us see how the device holds up against it, and do really the Apple Fanboys, need to sell iPhone and make a move now? Well let us find out.

The iPhone brings in the solid aluminum build, along with curvy and smooth edges, and the new Nexus 6P brings in the metallic body, which is quite impressive, one has to say that. The thing that amazes us, that Nexus 6P has a bigger screen size as compared to the iPhone 6 S Plus, whereas the dimensions of both of these devices is the same. So clearly the Nexus 6P has the edge here.

The Phone 6S Plus features a 5.5 inch 1080p IP Display, whereas the Nexus 6P brings the AMOLED 2K display on the table. Also it is high time for the iPhones to start bringing in better resolution devices, as 1080p just doesn’t cut the deal these days. Though the iPhone does come out on top with the screen brightness and better performance in the sunlight. Though the resolution of the iPhone is lower, but still it manages to look better when you view it, but still doesn’t support resolutions above 1080p. So we could assume a tie here.

The Iphone 6S Plus comes with a 13 Megapixel camera, with optical image stabilization and deep trenches isolations, which really brings out really great results, one could expect from a smartphone camera. Whereas on the other hand, the rear shooter on the Nexus is really the best one out there yet, the light management and the results it gives you even in the low lighting condition. Though comparing the video performance, the iPhone 6S Plus has an edge here, due to the ultra high audio quality on the videos.

The iPhone 6S Plus comes with a A9 processor clubbed with 2 gigs of RAM, and produces great results, and the benchmarks prove it too. On the hand the Nexus 6P features a Snapdragon 8 core processor with 3 gigs of RAM. Though the Nexus 6P looks better on the paper, but the real life performance of the Phone 6S Plus proves to be much effective. The management and the smooth OS of the iPhone makes the performance better and takes the experience to a whole new level, and gives it a edge here.

Coming to the battery life iPhone features a 2915 mAh, while the Nexus features a 3459 mAh. An interesting fact is, that despite of having a really low battery as compared to the Nexus 6P, the iPhone still manages to give the same stand by time as that of the Nexus. So this ties up in the battery section.

So after having a look at the various aspects along with the features, what do you really think? Would you sell your current iPhone for the Nexus 6P? Or stick to the iPhone? Let us know in the comment section below.

Save Ink with Efficient Typefaces: Here’s How

4 Steps To Sell Your iPhone