Windows 10 was the most ambitious operating system ever launched by Microsoft. After years of lagging behind the competition in adopting trending technologies, like mobile and cloud, the Redmond giant has used its little grey cells to jump ahead. It has built an operating system that covers all platforms, from smartphones to servers, as well as a new app architecture to run on all of them. Universal Apps range from productivity tools to Canadian online casino games, and adapt to the screen size and processing power of the devices they run on. And Windows 10 also comes with an exciting new feature for mobile phones, that makes PC on a Stick pale in envy: Continuum, which allows phones to work as a pocket-sized PC.

Despite the high hopes Microsoft had in its new smartphone platform, the industry still thinks that Windows Phone is dead. Indeed, if you look at today’s smartphone market, you’ll see that Apple’s iOS and Alphabet’s Android lead detached. Windows Phone is the third when it comes to market share, but almost insignificant compared to the two giants. And other alternatives, like Ubuntu or Firefox OS, lag behind even more. And the launch of the two new Microsoft flagships, the Lumia 950 “twins”, didn’t help either: they were released ahead of time, with a still buggy operating system, which has brought quite a lot of user criticism on their heads. 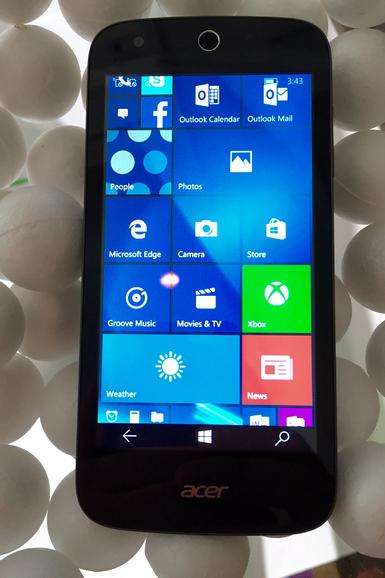 But let’s not think of Windows 10 on phones as a consumer product, but rather one aimed at businesses.

Acer, the Taiwanese electronics manufacturer best known for its laptops, has presented a Windows 10 handset at this year’s CES. Called the Liquid Jade Primo, it will have a rounded design with a slightly curved back and impressive hardware for its 569 Euro ($640) price tag. It will be powered by a Snapdragon 808 hexa-core chipset paired with an Adreno 418 GPU, 3GB of RAM and 32GB of internal storage, a 5.5″ full HD display, a 21MP camera with autofocus and LED flash, and all the connectivity options you might need. Until now, there’s nothing to set this handset apart from the rest of the similar ones on the market.

But Windows 10 makes this phone special.

First of all, instead of focusing on entertainment and social media, the Jade Primo is built with productivity in mind. Its operating system allows it to easily integrate with an existing Windows 10 powered business network. It also allows security professionals to remotely manage updates and lock the phones if the need arises, making them more secure than the competition. Windows 10 running on the phone eliminates any issues related to document formats, making it easy to access, edit and save any business documents on the go.

And let’s not forget about Continuum, the most exciting feature of Windows 10 phones to date. When used with a wired (USB-C) or wireless adapted, Continuum can turn any Windows 10 powered smartphone – Jade Primo included – into a fully fledged PC. This can allow users to leave their laptops at home, and do much more work on the go using their smartphones only. Which is a feature to be liked, at least.

Windows Phone might be dead for everyday users, but it has great potential for businesses. Its fresh features, along with their ease of use with Microsoft’s business products, might just be enough to ensure its long term survival.

How to Make It Big with Social Media

Chance To Get Cash In Hand Immediately For Your Business Growth

How To Choose The Best Online Games For Your Children

The Past, Present And Future Of Live Casino in Canada