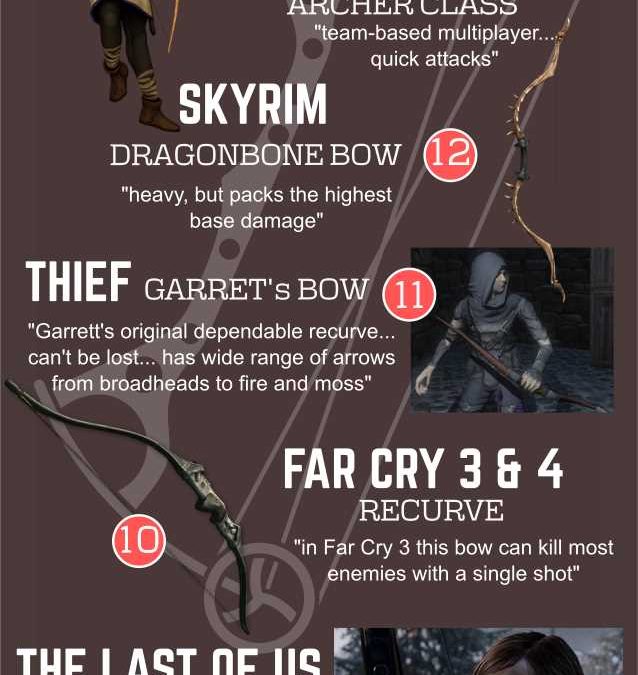 Who hasn’t used a bow and arrow in a video game? From Zelda to Crysis there’s a bow and arrow (or a crossbow) featured on just about every platform imaginable. Retro games have bows, sci-fi games have bows, there’s magical variants, and just plain weird bows. There’s a host of crossbows and there have been many attempts to make archery a fun sport on both consoles and PC’s. The folks at targetcrazy.com have compiled a list of the best 50.

If you want to see the whole list, take a look at the full article here, but here’s a graphic that shows the top 20 overall.

Longbows from Age of Chivalry….. The Best?

If you’ve never played it, Age of Chivalry is a free mod for Half Life 2 that totally changes the games into a one based on medieval combat between 2 opposing sides. If you don’t remember it you may have come across the game the developers eventually made called Chivalry : Medieval Warfare.

In the game you can fight with a longbow, a crossbow or a javelin but the longbow archery in this game is pretty realistic which is why it gets the top spot!

Have you ever played Age of Chivalry or Chivalry Medieval Warfare? Do you think it’s the best bow action to be had in a game?

A Comprehensive Guide to Esports Betting